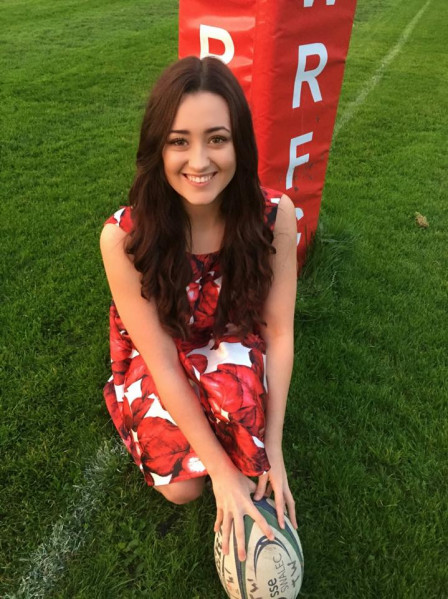 Chloe juggles her love of pageantry and rugby!

A young woman from Tonyrefail in the Rhondda Valley has made history for her rugby club at the same time as becoming a Miss Wales 2016 finalist.

Twenty-two-year-old Chloe Dobbin, from Tonyrefail, is an IT specialist for the NHS and has a degree in Sports Studies, specialising in athletics and gymnastics.

This summer to support some work colleagues, she watched them get together for the first time on a rugby pitch to play in a charity match in aid of Lynch (which supports people with Lynch Syndrome) and Clapa (which helps people with cleft lipand palate). The game raised more than £4,500.

Chloe said: “I went along just to support everyone but then one of the girls in work suggested I have a kick about with them in the new Taffs Well Ladies team’s first official training session. I decided to give it a go. Little did I know that they had plans to rope me in as a player. I’d never set foot on a rugby pitch before.

“I loved it. I’ve always been into sport and I’m quite fast so before long they had me signed up as a full back wearing number 15!”

For Chloe, the transition from gymnast to rugby player was all a bit of a whirlwind.

She explains: “Taffs Well RFC has been around for 127 years, and has never had a ladies team. The charity match was their first time the girls had ever been on a pitch together. After a few weeks training, we had our first proper match against Croesyceiliog. Even though we lost 45-14 it was a memorable moment as I scored the first try ever for the ladies team so I’m part of their history books now!”

At the same time, as becoming a part of history for Taffs Well RFC which plays in division three, Chloe was also accepted as a finalist in the Miss Wales 2016 competition.

All her team mates are planning to cheer her along at the final in April next year.

She said: “People are a bit shocked when I say I’m in Miss Wales and play rugby. I’m definitely keeping up with the rugby now though. I love it and all the characters there but I’ve warned them I can’t be black and blue for the Miss Wales final.

“The club and the all the girls have been really supportive of me in Miss Wales. I’m hoping to do some charity events at the club too so that I can bring my passion of rugby and pageantry together!”

← Back to main news page