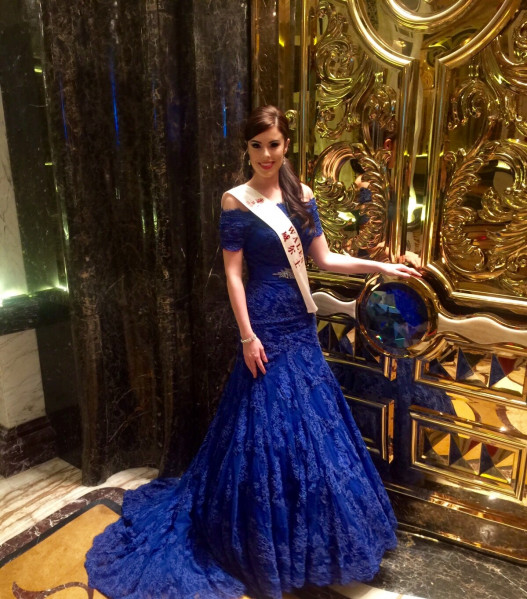 It was a four week experience with women representing more than 100 countries from around the world which culminated with the 2015 Miss World final at Beauty Crown Grand Theatre, Hainan Island, Sanya, China on 19 December.
Her time at Miss World involved seeing the sights and the sounds of the beautiful country and enjoying the warmth and hospitality of the Chinese people.
Emma, a  fluent Welsh speaker and TV presenter and researcher from Llanelli, has worked tirelessly for Beauty With A Purpose since being crowned Miss Wales in March this year.

She raised close to £1,000 for Beauty With A Purpose in the run up to the competition with a series of raffles, bake sales and a curry night for the charity, Since then she has more than doubled that figure with a Miss Wales Wedge Walk involving the 2016 finalists in a high-heeled charity walk around Cardiff. She also organised a fashion show in her home town of Llanelli roping in one of Wales’s best-loved rugby team to support her and make guest appearances.
Emna has also become involved with Women’s Aid as part of her commitment to the Miss World ethos of Beauty With A Purpose and her own personal desire to help empower young women.

She has signed up to complete a domestic abuse awareness course aimed at preventing children and young people from developing or entering into abusive relationships. Emma is also hoping to support the team on a new initiative called the Sparrow Project which has been inspired by Rachel Court from Newport. Rachel’s plight came to national attention in 2011 when her husband – who has been an abusive partner for 18 years – shot her and then himself while she was at work in a hair salon.

The winner of Miss World in 2015 was Mireia Lalaguna of Spain.

← Back to main news page